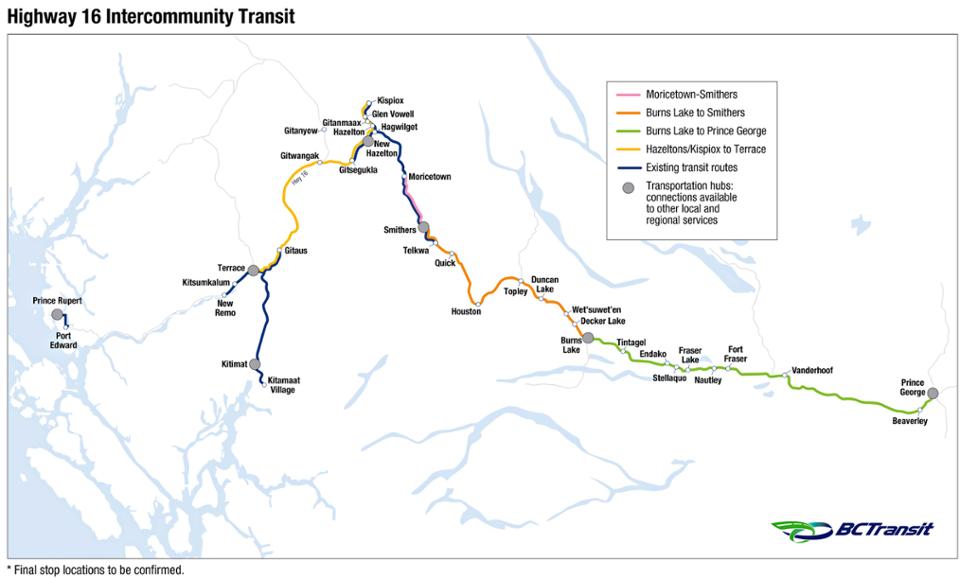 Revised service options based on public consultation results were developed and shared with local decision makers in October 2016 for their consideration and approval. BC Transit staff continue to work together with them on local funding approval and routing adjustments to implement transit services. More information about implementation will be shared as funding agreements are completed.

An additional area segment (Hazeltons Area to Smithers) has been added in recognition that further enhancement to existing service in this area is warranted to meet transportation needs and to bring regional services to a consistent level across the corridor. Therefore, the service area segments addressed by Highway 16 inter-community transit service initiative are as follows:

For your information, below are the original August 2016 materials used for public engagement.  These are now in the process of being revised based on public feedback heard.  Once presented to decision makers for their consideration, it is expected that the revised proposals will be presented here.

In collaboration with community leaders, BC Transit has undertaken work to confirm the feasibility, scope and costs of extended or enhanced Inter-Community public transit linkages along the Highway 16 corridor.

In partnership with First Nations and local governments, BC Transit undertook public engagement on the proposed Highway 16 inter-community transit from August 17 to September 16, 2016. Find out more about the engagement and its results.

Proposals are now in the process being revised based on public feedback heard. Updated proposals will be shared with local decision makers for their consideration and approval to implement.