BC Transit is committed to continuously enhancing your experience as a rider. As part of this endeavour, we are moving forward with the installation and development of technology initiatives to improve efficiency, increase security and put you in control of your BC Transit experience.

Funding for this project is coming from the Public Transit Infrastructure Fund (PTIF), which was announced in June 2016 by the federal and provincial governments.

BC Transit is introducing NextRide, a convenient, smart, real-time solution to knowing when your next bus will arrive. NextRide uses Automatic Vehicle Location (AVL) and will be implemented on buses in seven transit communities: Kamloops, Nanaimo, Comox Valley, Squamish, Whistler, Kelowna and Victoria.

With the introduction of this technology comes a response driven website, enabling passengers to plan their trips from an internet connected mobile device or desktop, by viewing the location of your bus along its route and its predicted arrival time at a stop. Buses that have automatic passenger counters (APC) installed, will also provide current capacity information at any given time through the site. Inside the buses, upcoming stop information will be announced as well as displayed on passenger information boards, providing extra benefit to those who are visually or hearing-impaired.
NextRide information will allow BC Transit and its partners to better direct buses for schedule reliability and to more easily push alerts out to customers in the case of detours, accidents or other events that may delay regular routing.

NextRide will be rolled out in the seven communities throughout 2018.  More information can be found here.

BC Transit is refitting 283 conventional route buses in 13 communities with Automatic Passenger Counters (APC).  Data gathered from the APCs will allow BC Transit and its partners to assess ridership demands throughout the province, making it possible to better plan our routes and to adjust service hours from low demand routes to higher demand areas.

All new buses will have the APC units factory installed by the bus manufacturer prior to delivery. More information can be found here.

BC Transit is installing closed circuit television (CCTV) cameras on buses across the province. The CCTV cameras help deter inappropriate behavior on buses and provide another tool for investigation if an incident occurs.

The installation of the CCTV cameras follows a proof-of-concept period in Victoria and Kamloops in 2015-16. The proof-of-concept showed that the cameras provide a positive benefit to enhance security and safety including evidence to ensure successful conclusions for security investigations.

Click here for more information about the CCTV expansion project:

Information is collected under authority of the Freedom of Information and Protection of Privacy Act.
If you have questions about the collection of this information, contact BC Transit:

NextRide is a BC Transit initiative to implement Automatic Vehicle Location (AVL) technology on buses.

BC Transit will install video and audio recording equipment, known as closed circuit television (CCTV) cameras, on 376 conventional buses (27 feet and longer) in the existing fleet, acquired in 2006 and later.

Now live in seven BC Transit systems, including Victoria! 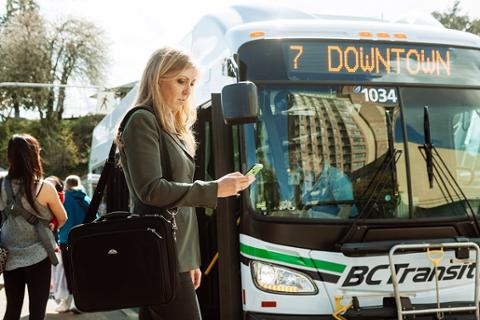 How to use NextRide