The following plans have been approved by the Victoria Regional Transit Commission: 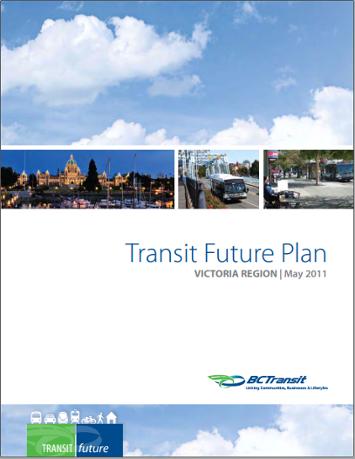 The Transit Future Plan envisions what the region’s transit network in 25 years and identifies what services, infrastructure and investments are needed to get there. While the plan lays out a path that BC Transit will lead, the plan’s success relies on strategic and financial partnerships between local and regional governments, the Province of British Columbia and BC Transit.

The Transit Future Plan promotes land use changes in the region that facilitate an increase in the use of transit and other sustainable modes of transportation. The plan is designed to accommodate the ridership necessary to achieve the Provincial Transit Plan mode share targets; however, municipal, regional and provincial planning agencies are pivotal in the creation of demand through strategic Transit Oriented Development, transit friendly land use practices, Travel Demand Management practices and the provision of right-of-way for transit priority measures.

The Victoria Regional Transit Service Review is one of the components of the Transit Future Implementation Plan. Developed collaboratively with transit passengers, front line staff, key stakeholders and local government staff from June 2012 to December 2013, the Service Review provides performance standards and transit service changes that align with the Transit Future Plan network. The key goals of these changes are to improve service to customers and the effectiveness of the transit system, particularly in order to outline ways that existing system resources may be reallocated or optimized to best serve existing and future ridership and land use patterns. The Service Review also outlines future service expansions and infrastructure investment that will guide the development of future three-year Service and Financial Strategies.

At the request of the Capital Regional District (CRD), BC Transit has undertaken this Service Discussion Document to provide an initial exploration of the feasibility, scope and costs of a more formal transit system or public transportation network on Galiano, Mayne, South and North Pender and Saturna Islands. These areas represent the major islands within the Southern Gulf Islands Electoral Area.